The Norwegian author Karl Ove Knausgård will be the seventh and the first Nordic recipient of the Hans Christian Andersen Literature Award as he will receive the 2022 edition of the prestigious award. The award will be presented in October at a ceremony in Odense, Denmark.

The Norwegian author Karl Ove Knausgård will be the seventh and the first Nordic recipient of the Hans Christian Andersen Literature Award as he will receive the 2020 edition of the prestigious award. The literature award has previously been awarded to Paulo Coelho, J.K. Rowling, Isabel Allende, Sir Salman Rushdie, Haruki Murakami and most recently Dame A.S. Byatt in 2018. The award will be presented next year at a ceremony in Odense, Denmark.

The author behind the monumental autobiographical novel series My Struggle (2009-11), Norwegian Karl Ove Knausgård (b. 1968), has just been announced as the upcoming recipient of the prestigious “2022 Hans Christian Andersen Literature Award”.

The motivation of the award committee:

Karl Ove Knausgård made his debut as a literary writer in 1998 with the novel Out of the World for which he received the Norwegian Critics Prize for Literature as the first newcomer ever. He released the follow-up novel A Time for Everything in 2004, which was similarly well-received both nationally and internationally.

A strong ambassador for Nordic literature

However, Knausgård is predominantly recognized for his colossal masterpiece My Struggle, which was released in six volumes from 2009 to 2011. The sales figures for the serialized novels climbed above half a million in Norway and has since been released in the rest of the Nordic countries and most of the Western world. Because of that, Knausgård has become a literary rock star – not only in the Nordic countries but in the United States and in the UK as well.

In My Struggle he describes his upbringing and family life meticulously and with great emotional intensity. Internationally, this has led to a heavy debate regarding the distinction between fiction and reality. However, in the end the novels have proven to be very relatable – for both male and female readers.

Since then, Knausgård has published a series of noteworthy essay collections, amongst them a four-volume seasonal book series dedicated to unborn daughter. In 2019 he published a novel titled Fuglene under himlen (The Birds Beneath the Sky), in which Knausgård returns to the world of fiction through a tightly composed story, which is the baseline for a theatre version of Henrik Ibsen’s Peer Gynt. The novel includes references to the Danish philosopher Søren Kierkegaard.

Along with the honor, Karl Ove Knausgård will receive the bronze sculpture The Ugly Duckling by sculptress Stine Ring Hansen, a prize of 500.000 DKK and the diploma The Beauty of the Swan.

In October 2022, Karl Ove Knausgård will be in Odense, Denmark to receive the award at a ceremony. 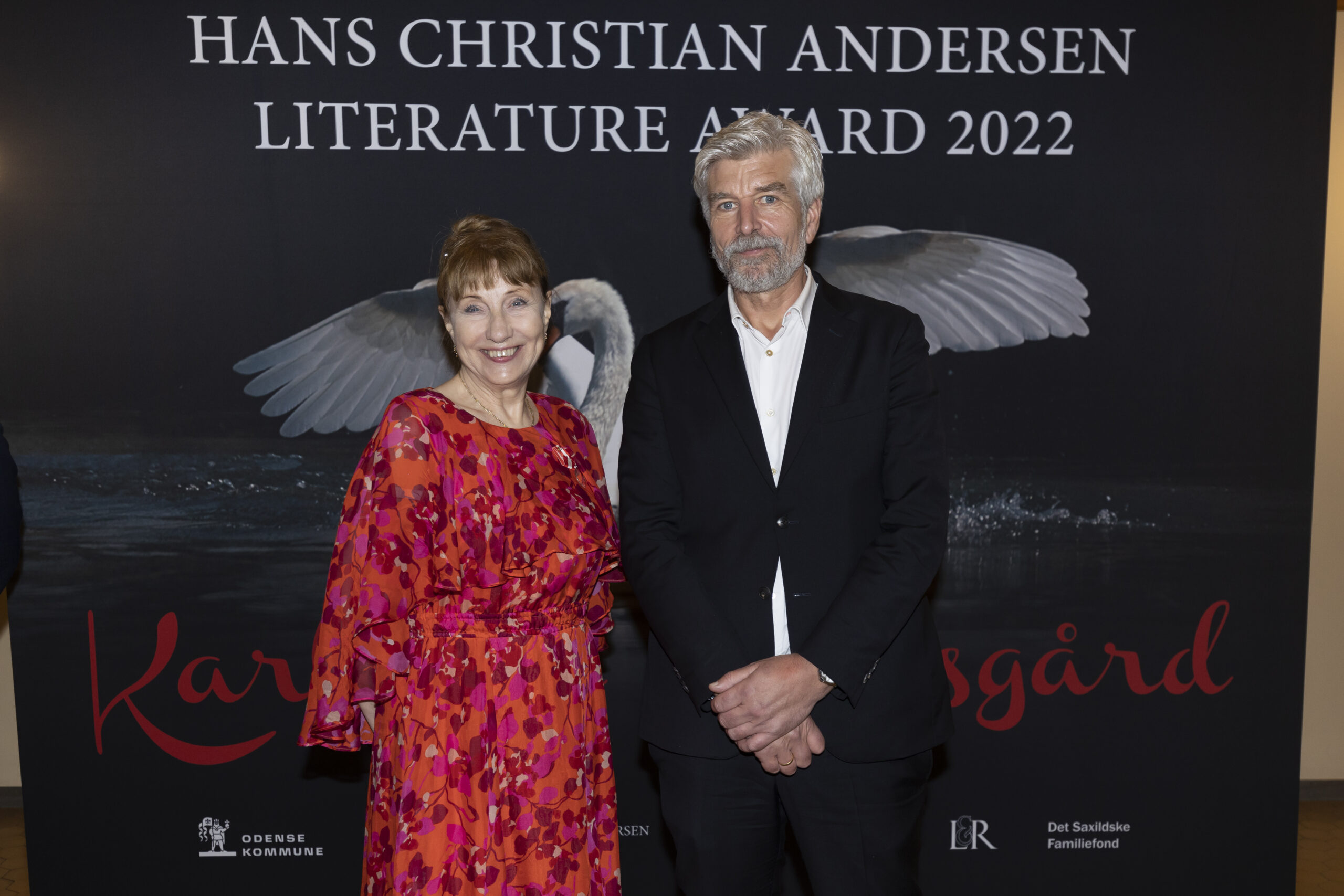 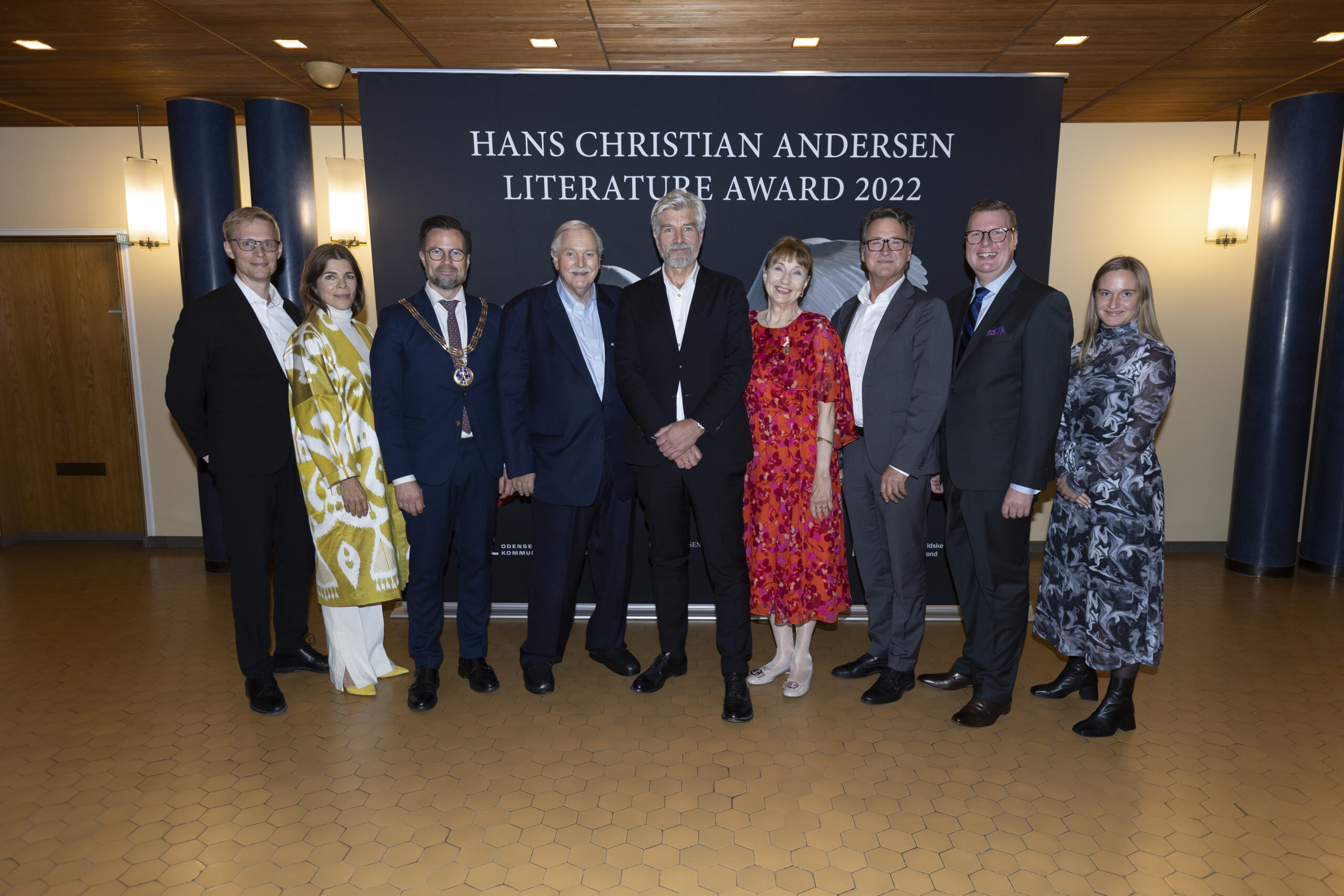 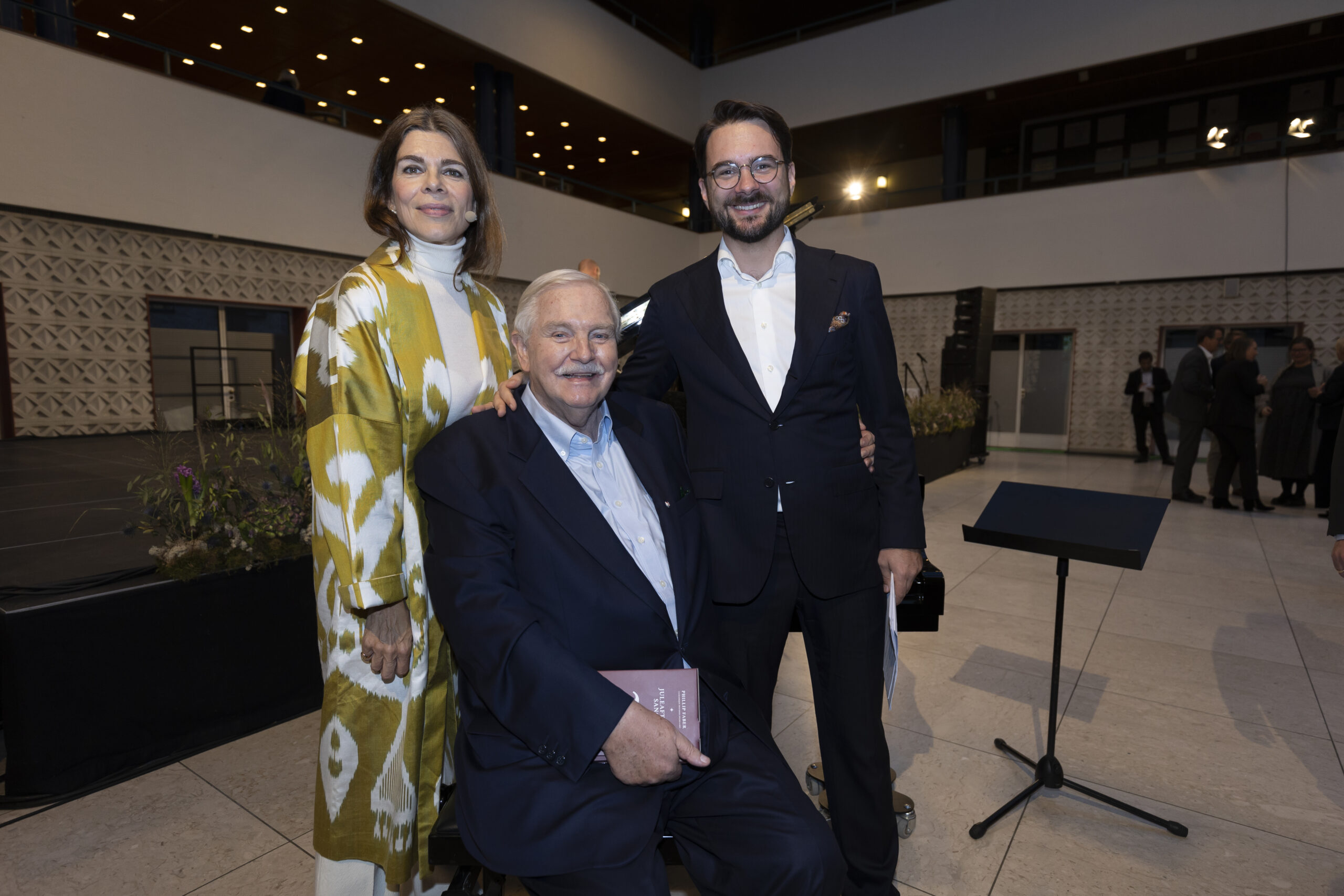 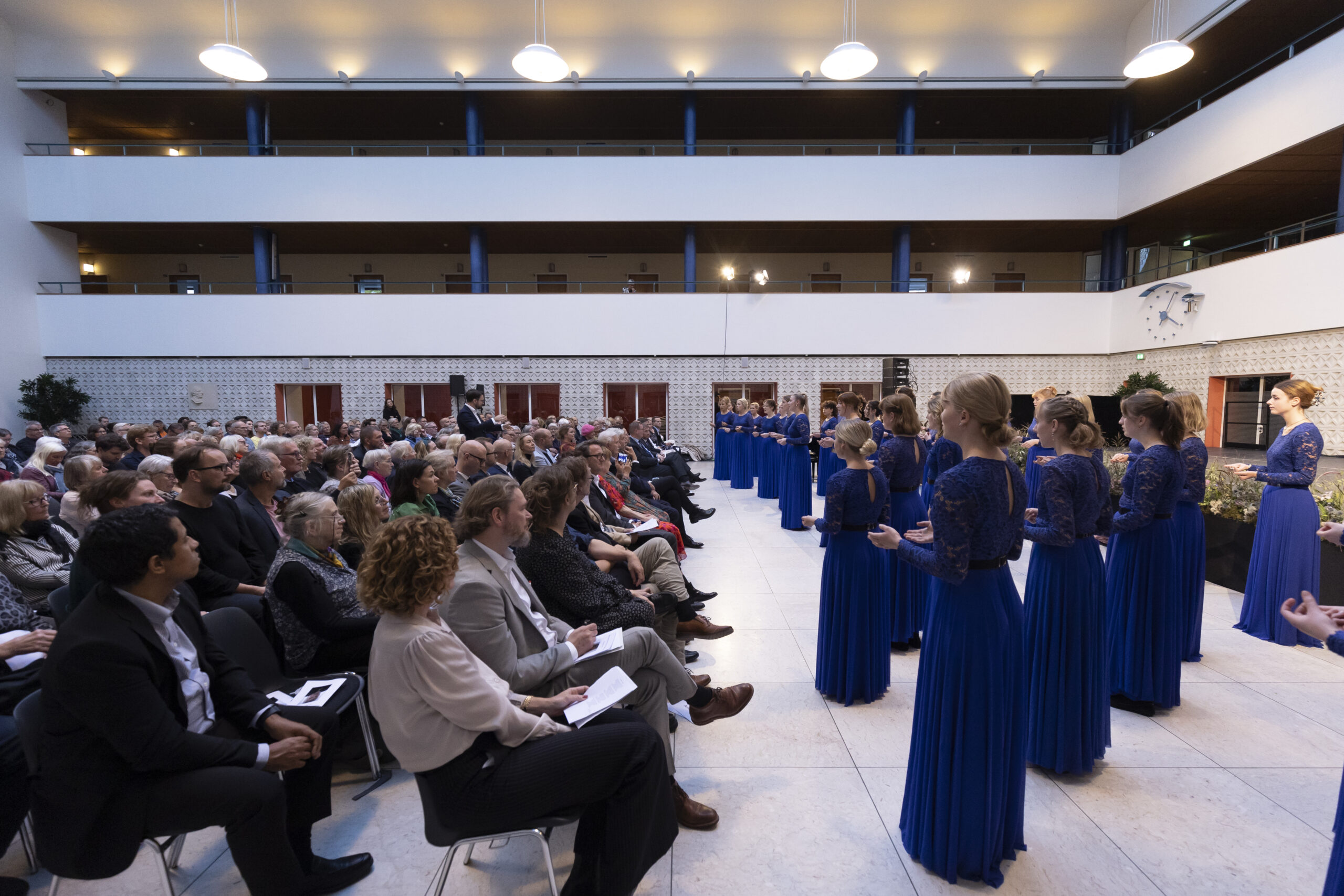 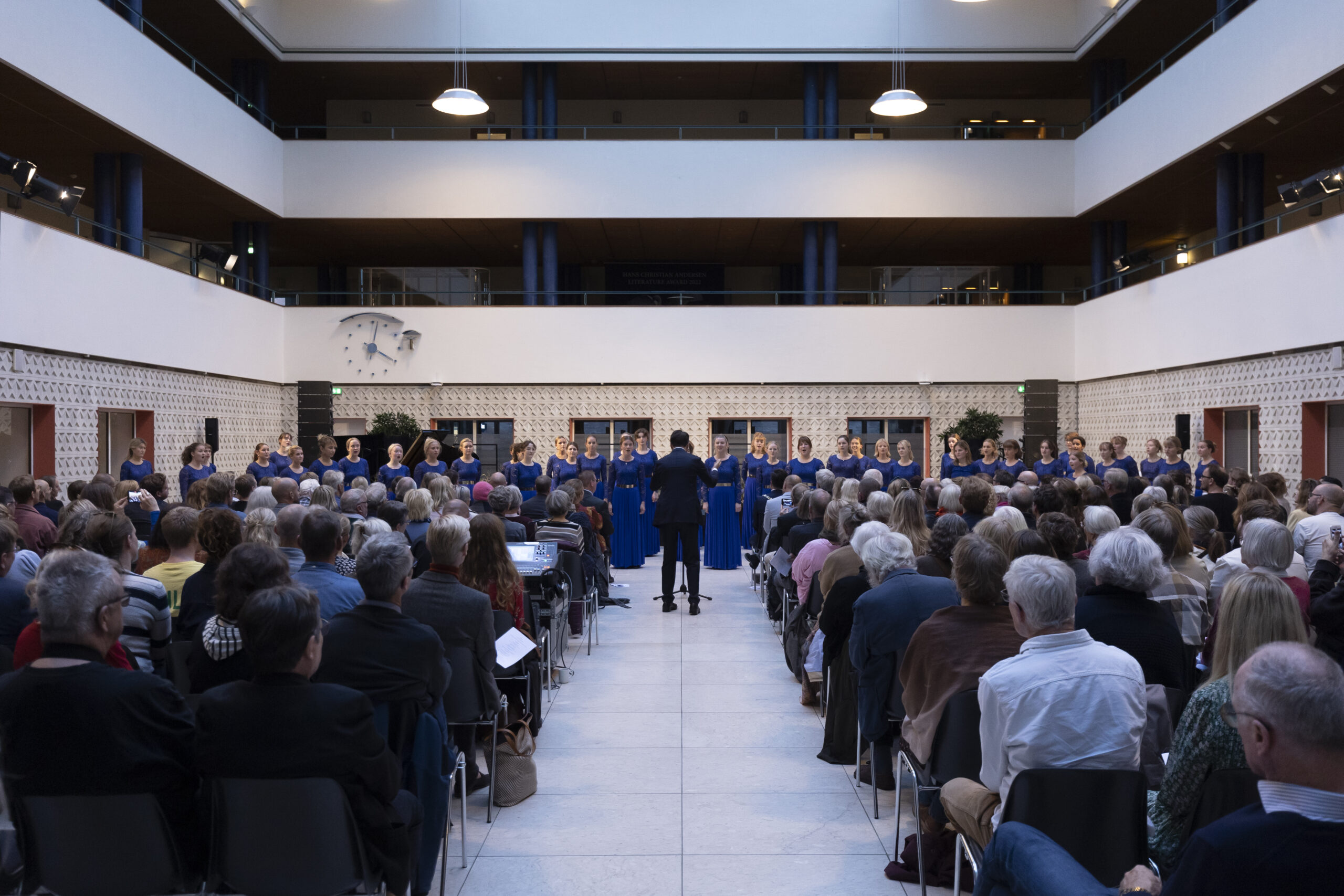 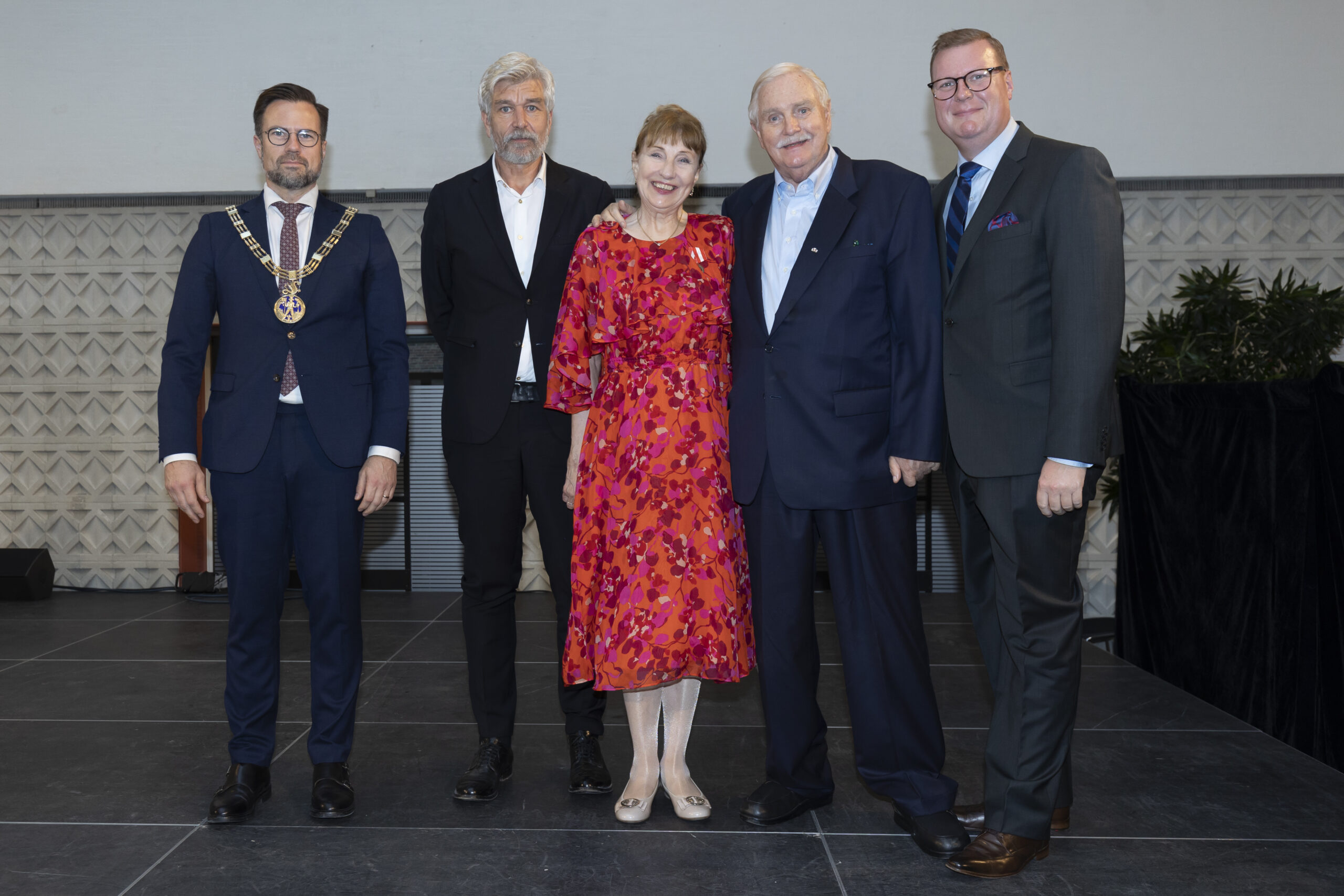 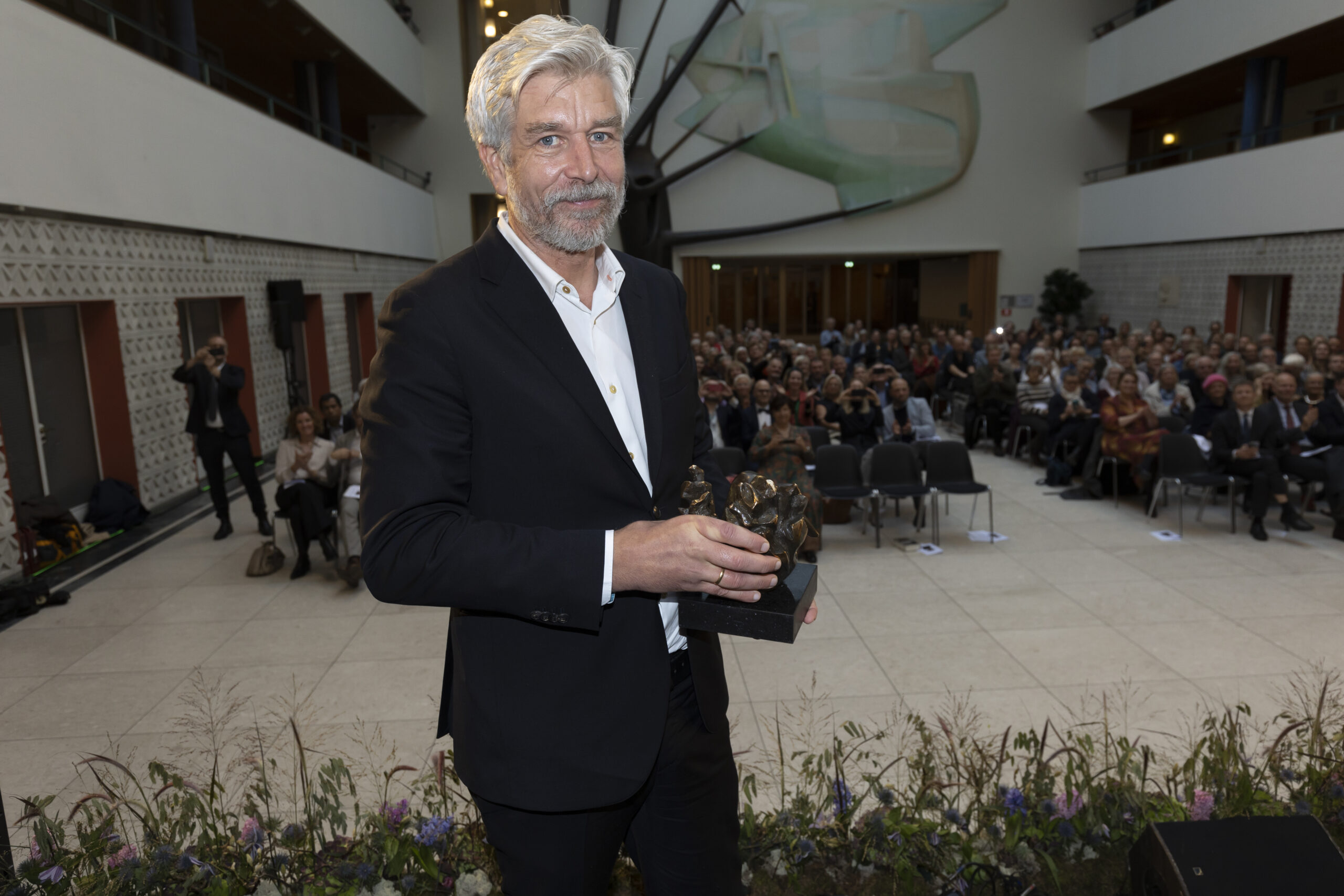 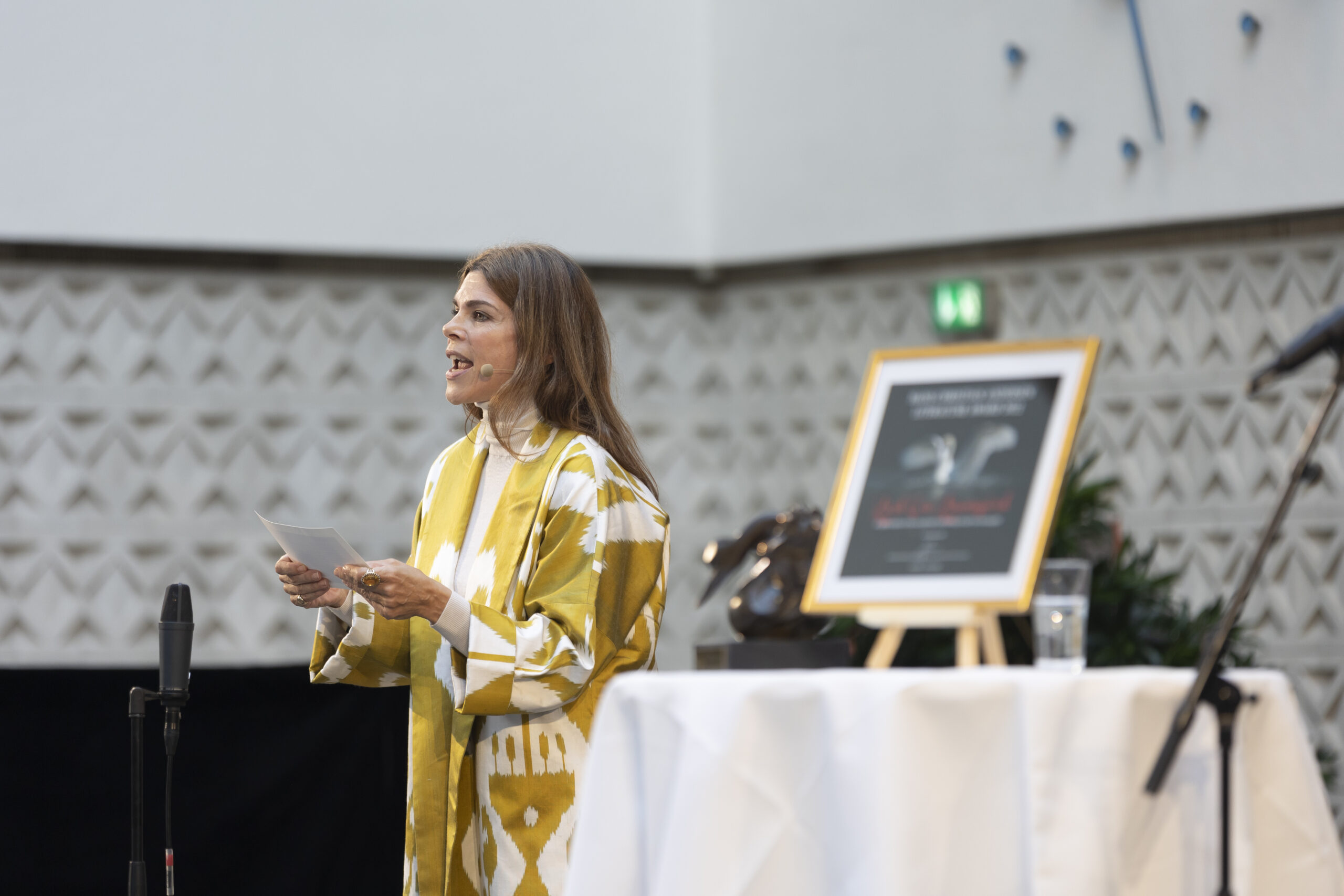 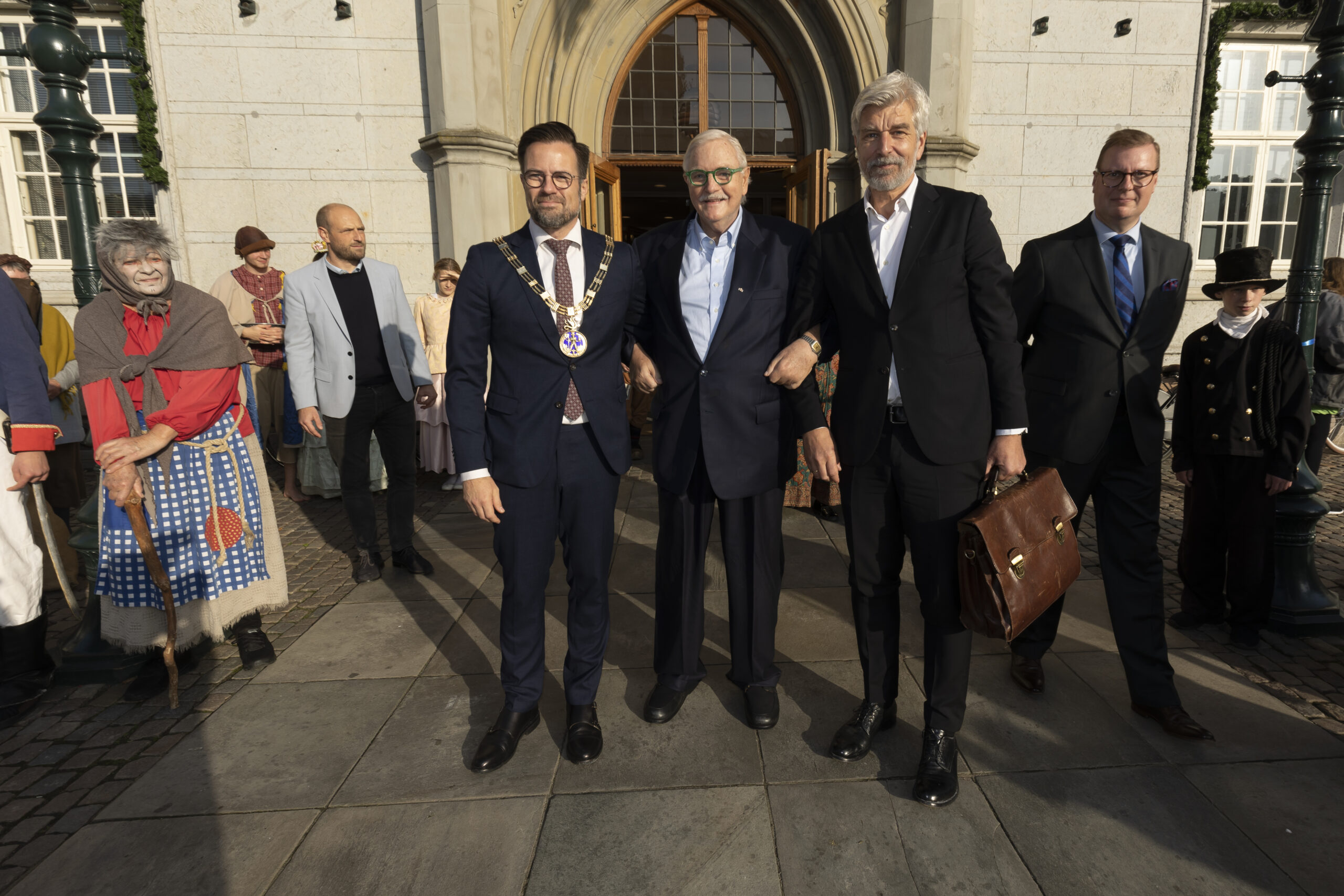 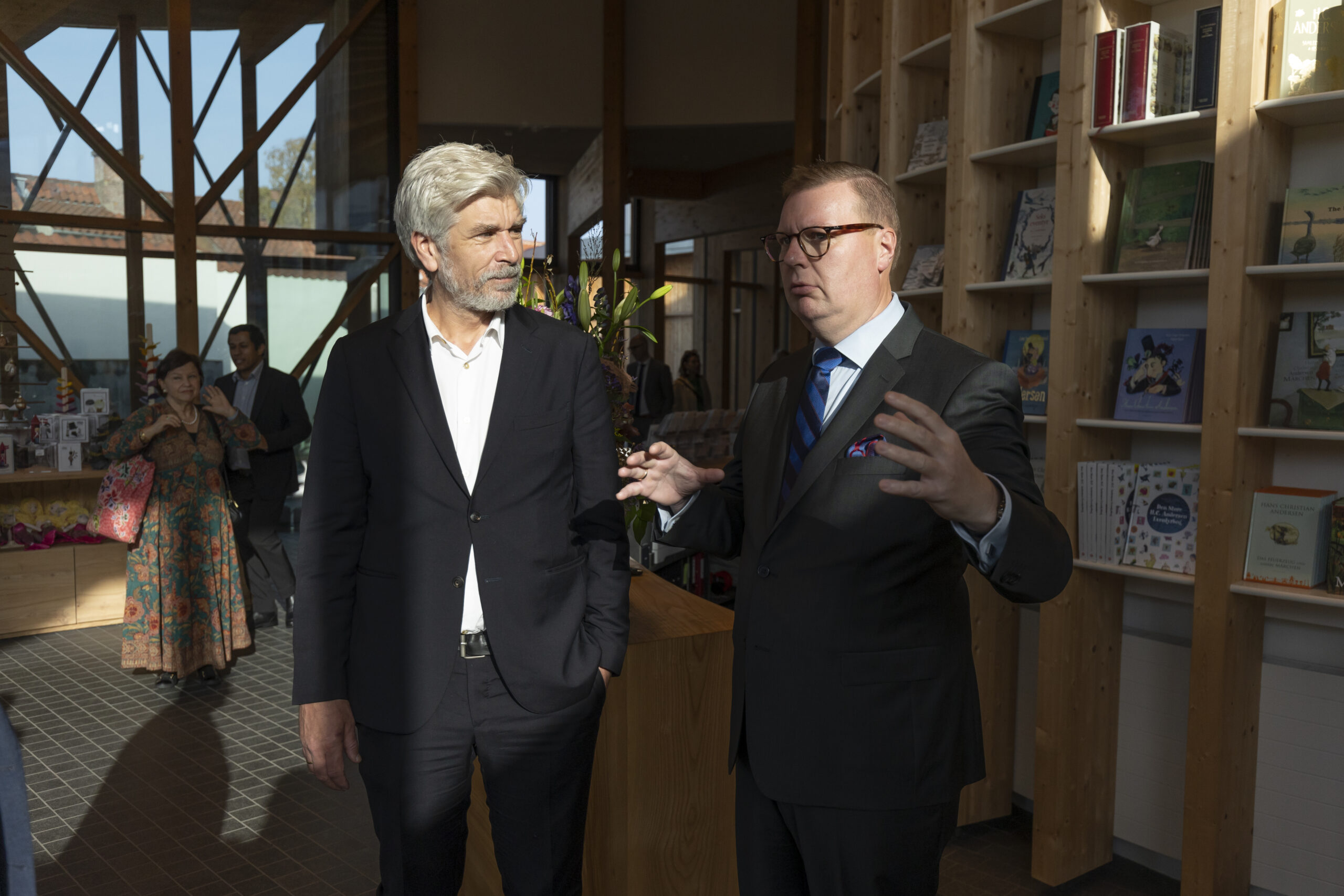 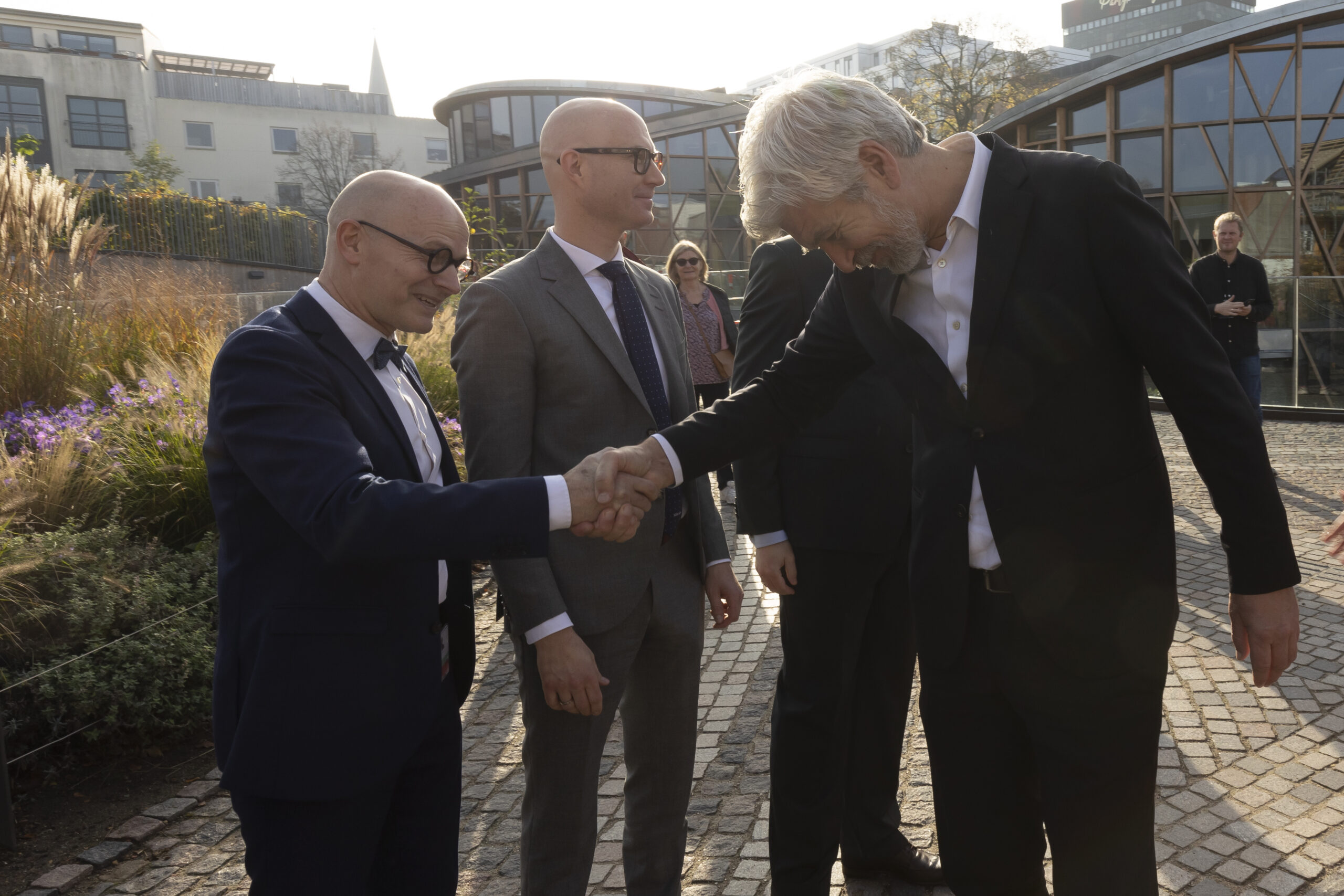 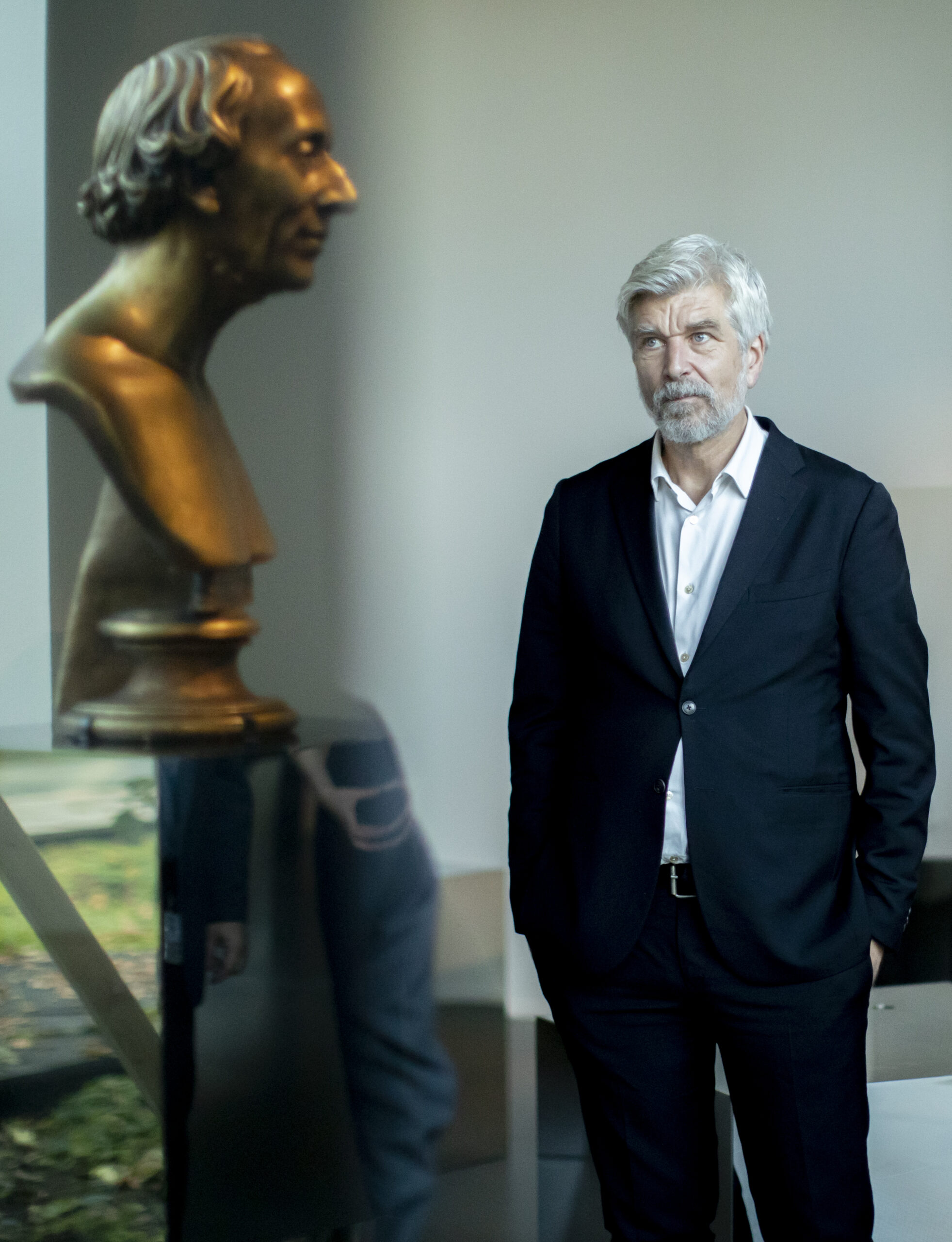 It’s a great honour to receive a literary award in H.C. Andersen’s name. If I were to dare sum up H.C. Andersen’s life and writing in one word, it would be “excess”. From the time he came to Copenhagen from Funen as a fourteen-year-old, where he sang and danced for everyone who wanted to see him – and for some who didn’t want to see him either – or until he died in the same city 55 years later, everything that H.C. Andersen did was characterized by excess. From the very beginning it is as if he overflows with words, phrases, rhymes, and songs. He himself said that “ideas come like chickens, one on top of the other”. His entire authorship testifies to the fact that ideas and whims appear like chickens, and the question that inevitable arises is: where did they come from? How could it happen that a country boy with no education overflowed with words, phrases, rhymes, and songs?

He published his first book called Ungdoms-Forsøg when he was seventeen years old under the pseudonym Villiam Christian Valter. Villiam is Shakespeare, Christian is Andersen himself, while Walter is Walter Scott. The choice of name is of course indicative of youthful arrogance, but it also says something about where Andersen went as a seventeen-year-old: he was in the middle of the story. The debut book, which was an early example of crowdfunding, contains some autobiography, some Shakespearean drama, some Nordic saga, some Scottish adventure novel, some local legends, some adventure, some rhyme, and some Danish contemporary poetry.

Andersen was always a wild writer, but never wilder than here, for better or worse – aesthetically perhaps mostly for worse, but what you can see and feel is an enormous need for expression, the boy overflows with text, and in that there is of course an equal such great vitality and not least joy of life. It is noteworthy that, at about the same time, Denmark fostered another writer who was equally full of surplus, wildness, and freedom in his writing, and who was also to enter world literature, namely Søren Kierkegaard. After all, H.C. Andersen and Søren Kierkegaard are opposites in almost every imaginable way – while Kierkegaard shines up in the sky of philosophy, together with the greatest thinkers of modern age, H.C. Andersen is down in the depths of people, where his stories have settled so empathically that his name have almost disappeared from them – everyone knows about the emperor’s new clothes, everyone knows about the little mermaid, everyone knows about the princess and the pea, but not everyone knows, at least not outside of Scandinavia, that it was H.C. Andersen who wrote them. They are antagonists, but what they have in common is perhaps the most important of all for a writer, and perhaps not as common as one would think, which is closeness to writing.

The distance between thought and text is extremely short in both, and thus the distance between author and reader is correspondingly short. In the case of H.C. Andersen, the distance to the outside world was also remarkably short, for him, it would seem that all stories were tales, whether it came from an old aunt and had been memorized for several hundred years, or whether it was written by Oehlenschläger, doesn’t seem to mean anything to the young Andersen, it was the story he heard, and it was the story he eventually refined to such a level that he himself, the longest sloe with the common name, simply disappeared from it, as if he was so joined in the telling that in the end he could not be separated from the story he was telling.

To receive an award in the name of such a writer is of course a great honour. It gets bigger when I look at the list of previous award recipients. I read both Isabel Allende and Salman Rushdie as a teenager, along with other writers in the direction that became known as magical realism, and for a few years I tried to write myself, especially like Rushdie, it was the surplus of his novels that I looked for the abundant, lush, imaginative life, until I understood that the description of life must somehow come from within to be true. Everyone who writes is open to what they read, but what they read can’t just be taken in, it must go in, mixed with all the other experiences before it can come out again and become true. This cannot be planned, form is not a habit you pick up, form is something that arises when there is a short distance between the world and the self and between the self and the text. As different as the former awardees are, they have one thing in common: the story is their element, in their story they are free. And few writers have been freer than the one in whose name this award is given.

Thank you very much!